I’m working to put together a new training focused on gathering client accomplishments.

I happened to be thumbing through (electronically, of course), a back issue of the Resume Writers’ Digest newsletter (the July/August 2001 to be exact), and I came across this “From from the Editor” column. Even now, 18 years later, it’s still timely, so I’m reprinting it here. (I typed the text in below because I didn’t think you’d be able to read the screen shot.) 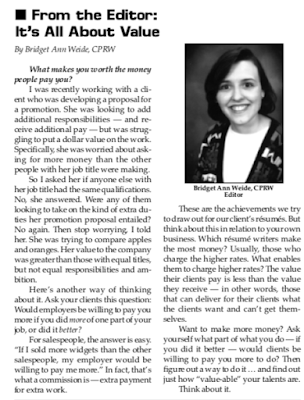 It’s All About Value

What makes you worth the money people pay you?
I was recently working with a client who was developing a proposal for a promotion. She was looking to add additional responsibilities — and receive additional pay — but was struggling to put a dollar value on the work. Specifically, she was worried about asking for more money than the other people with her job title were making.

So I asked her if anyone else with her job title had the same qualifications. No, she answered. Were any of them looking to take on the kind of extra duties her promotion proposal entailed? No again. Then stop worrying, I told her. She was trying to compare apples and oranges. Her value to the company was greater than those with equal titles, but not equal responsibilities and ambition.

Here’s another way of thinking about it. Ask your clients this question: Would employers be willing to pay you more if you did more of one part of your job, or did it better?

For salespeople, the answer is easy.“If I sold more widgets than the other salespeople, my employer would be willing to pay me more.” In fact, that’s what a commission is — extra payment for extra work.

These are the achievements we try to draw out for our client’s resumes. But think about this in relation to your own business. Which resume writers make the most money? Usually, those who charge the higher rates. What enables them to charge higher rates? The value their clients pay is less than the value they receive — in other words, those that can deliver for their clients what the clients want and can’t get themselves.

Want to make more money? Ask yourself what part of what you do — if you did it better — would clients be willing to pay you more to do? Then figure out a way to do it ... and find out just how “value-able” your talents are.

By the way, there is a TON of golden information in the back issues of the Resume Writers’ Digest newsletter, which was published bimonthly from July 1999 through March 2005 and intermittently since then. If you are a Bronze member of BeAResumeWriter.com, you have access to the Archive of Back Issues. It’s just ONE of the many benefits of membership for just $13/month! Join here.
1 comment: