This is the third post in a series refuting an article in Bloomberg Business on: "Five Out-Of-Date Job Search Tactics". (You can feel free to weigh in using the Comments section below, and check out yesterday's post on "Creaky Cover Letter Language" here.) 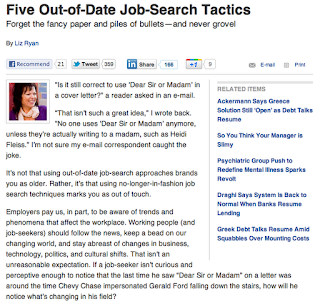 They say: (Saying) "Here's Why You Should Hire Me" is out-of-date.
Last Friday night, on the ABC show, "Shark Tank," all five "Sharks" (potential investors) made an important point to the gentleman pitching his company, Salespreneur. (Dave Greco)
Daymond John asks the pitchman (who is supposedly a master salesman) to "sell me this pen." The guy does so, for about 20 seconds, but quickly turns his attention to asking for an investment. Daymon John interrupts him and asks him again to finish his "pen pitch." He does, but forgets to ask for the order! The sharks were quick to point this out to him.
Not only is the third point in this the Bloomberg article confusing, but it's also missing an important distinction for job seekers. Companies need great employees just as much as employees need jobs. It's often been said that interviews are a lot like dates -- you're looking for a "match." In the interview, the interviewer is getting to know the candidate better, especially how the prospective employee will "fit" into the company. But it's not a one-sided conversation. The job seeker is also assessing the interviewer and the company. If that's not done by sussing out qualifications (on both sides), what's the point?
Which leads to the next statement in the article. I agree with this: "People get hired when a hiring manager believes, intellectually and emotionally, that the person sitting in front of him or her can do the job."
But then the whole rest of the section is about how job seekers shouldn't "grovel and beg" for a job? What? Since when is presenting your qualifications "groveling"? In surveys of pet peeves of hiring managers, not once have I read, "Applicant presented his/her qualifications and then asked for the job."
In more than 15 years in the careers industry, I've read hundreds of books on the job search. The author claims that "tons of job-search books and articles (nonetheless) encourage job-seekers to grovel and beg." Funny, I've never once read about that in a job search book.
I've also never seen a book with an idea that a thank you note to follow up to an interview should include "10 reasons you should hire me" -- but a cover letter that matches up the job requirements with the applicant qualifications  can be quite effective. I certainly don't equate that with "mewl(ing) and beg(ging) for a job."
And what about this line: "We never, ever want to construct lists of reasons an employer should hire us." First off, the use of "always" and "never" in an article are usually a red flag -- flexibility is required when considering tactics in a job search. (While I wouldn't recommend mailing a single shoe to a job interviewer with the cheesy "I wanted to get a foot in the door" line, the fact is, the tactic has worked for at least one job seeker. As Justin Bieber says, "Never say never.")
I agree that "If the reasons to hire don't come through in an interview, you've already missed the boat." But I'd also say that if the job seeker walks out of an interview without expressing sincere interest in the job, that's a missed opportunity. Companies want to hire people who want to work for them. (If they don't ask for the next step in the interview process, that's a missed opportunity too.)
Tomorrow: "Endless Bullets."