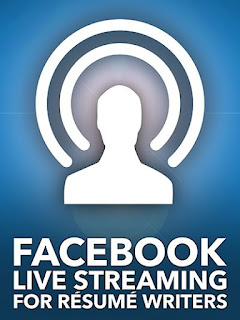 In the broadcast, I shared eight mistakes that resume writers and career coaches should avoid when using Facebook Live. I wanted to share them with you here. You can also watch the Facebook Live video replay here:

Mistake #8: Not giving a descriptive name to your broadcast
Your broadcast name serves as a "headline" for your content, giving prospective attendees an idea of what you're talking about. The right headline can attract viewers! The best headlines are seven words or less. After the broadcast, you can add a longer description to your video. But for the name of the video, keep it short but descriptive!

Mistake #5: Thinking of Facebook Live like a video
Facebook Live is LIVE television, so there are different things to consider than if you're publishing a video on your Facebook Business Page. Think of it as the difference between a TV news broadcast and a movie. Most people sit down to watch a movie from start to finish. But people "snack" on news -- tuning in at different parts of the broadcast (although some will watch the entire newscast). But in planning your Facebook Live video, you need to make sure that you're delivering your content to people who join you from the beginning as well as those who hop onto the broadcast midway through.

Mistake #4: Not being mindful of visuals
When choosing where to broadcast from, keep the visuals in mind. Watch out for weird protusions, dim lighting, and what appears in the background. Think about where to broadcast from that will best represent you -- that might be from your home office (or, if your office looks like mine!, somewhere else in the house). I did my broadcast from my living room because it has good lighting and Jon's artwork makes a nice backdrop!

Mistake #3: Talking to, but not acknowledging, the audience
One of the best things about using Facebook Live -- versus a video -- is the audience interaction component. If you simply talk at your audience without acknowledging them, you're missing out on the fun! Say "Hi" to viewers as they join. Read -- and respond to -- comments you receive while you're broadcasting. And ask for viewer feedback -- ask them to send you emojis so you can gauge their reaction to the content!

Mistake #2: Not recapping as you go along
As I mentioned earlier, people "snack" on Facebook Live videos, so they're constantly jumping in and out of your broadcast. Make sure that you recap as you go along, using phrases like, "If you're just joining me," or "To recap," and then summarizing the content.

Mistake #1: Not broadcasting often enough
One of the ways to get more clients is to position yourself as an expert resources -- especially through sharing content. Video is one of the best ways to do this, because they can see and hear you. If you're a resume writer who works with clients virtually, this is a great way to build that know/like/trust factor. You don't have to set up a regular Facebook Live broadcasting schedule (although I do give you an idea for how to do that in the training), but don't just go live once … the more you do it, the better you will get!

If you want to learn more about Facebook Live (including step-by-step setup instructions, equipment recommendations, what to broadcast about -- 12 types of content, best practices and more), become a Bronze member of BeAResumeWriter.com and get the 28-page special report on "Facebook Live Streaming for Resume Writers" as part of your Bronze member benefits. Join or upgrade here.

Facebook is just one tool you can use to attract prospective clients to your resume writing business. Getting publicity is another way. Check out my upcoming training next month: Feed the Media Webinar Series for Resume Writers and Career Coaches. 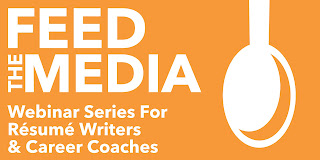 I've said it many times before, but resume writers are the ultimate "shoemaker's kids." You know, the shoemaker's kids are barefoot. When's the last time you looked at your own branding? You're constantly coming up with branding profiles for clients, but what do YOU stand for? 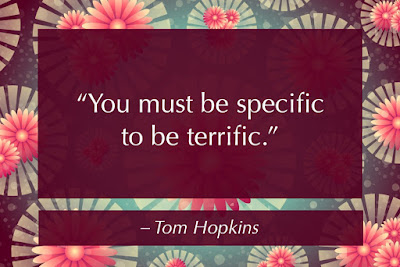 You can't be all things to all people. You need to put some serious time into deciding who you are, and what you do. Part of the process is creating your vision statement. This is your purpose. It becomes a took to help you manage and market your career services.

Here is an exercise to help you create your vision statement:

3. Keeping those verbs in mind, who is your target audience? Who benefits directly from your services and why you do what you do?

4. Organize these ingredients into a simple statement that describes your business purpose and who you serve. Once you have drafted seotmhing that makes sense (and feels right!), put it aside for a few hours -- or a few days.

5. Next, do the "ONLY ME" test. Is this vision statement true of ONLY ME? (It's the same test we do for personal brand statements for our clients. If the same statement can be said of any jobseeker with that pairtuclar job title, you need to change it to make it more specific. Remember, "You must be specific to be terrific." (A quote from sales trainer Tom Hopkins!)

Your result should be a clearly written, concise, dynamic statement that expresses your reason for being in business. 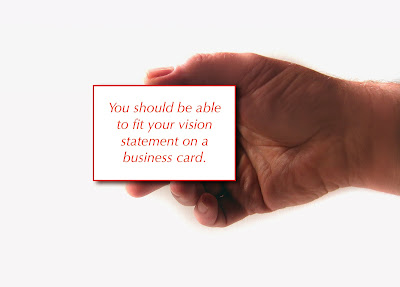