In our "Feed the Media" series, Sean and I talked about newsjacking: 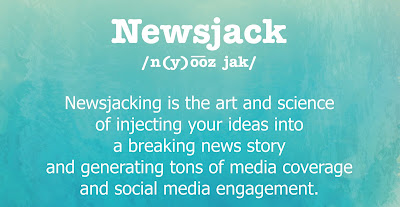 The term was coined by author David Meerman Scott.

Today, Adam Zajac of Vocamotive Inc., published a great example of how to newsjack the presidential election coverage -- tying his resume writing services into a current event.

He published "What To Do When Your Resume Needs a Little Work" on Buzzfeed. It features fictionalized resumes for presidential candidates Donald Trump and Hillary Clinton.

Here's the one he wrote for Donald Trump:


Here's the one he wrote for Hillary Clinton:


He presented both samples as "WHAT NOT TO DO" -- which I think is smart, although I would have gone a step beyond the content and provided some editorial guidance that relates to WHY those are "don'ts" on the resumes -- for example, the dates on the education section, the lack of strong accomplishments, and the presence of the candidate's photos on the resumes.

What makes this article work:

The version of the article that is currently up on Buzzfeed is Adam's second attempt. Buzzfeed has a "user-submitted" section, and he originally published a version that included a flier that gave soon-to-be unemployed politicians a discount on their resume services. I thought this was brilliant (and could be the subject of its own article after the election), but you have to remember that the first part of "newsjacking" is news. It's self-promotional without being overly self-focused. You can still promote yourself as a resume writer (and draw attention to yourself/your resume writing business) but without directly selling your services. He had to remove the flier promoting his services in order for the article to be re-published.

Take note: This same concept could be used to create a parody resume for fictional characters, like Santa Claus or the Easter Bunny.

Or, remember, you can newsjack almost any employment-related topic. For more information about David Meerman Scott, check out the fifth edition of his book, "The New Rules of Marketing and PR: How to Use Social Media, Online Video, Mobile Applications, Blogs, News Releases, and Viral Marketing to Reach Buyers Directly."