The Power of Who

This post originally appeared on my personal blog. The principles in the book are timeless, so I’m republishing it here for my career industry colleagues. 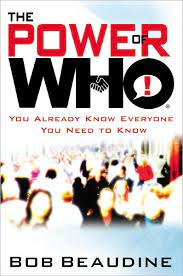 I recently finished reading “The Power of Who: You Already Know Everyone You Need to Know” by headhunter Bob Beaudine, and before I take it back to the library, I thought I’d better write down some of the key concepts. Normally, I’d take notes as I go through it, but I read it while blow-drying my hair over the course of a few days, and it’s hard to write and wield a blow dryer at the same time. (I take notes on most business books I read — not only is it a helpful reference for later, but I remember things better when I write them down, as opposed to just reading them.)

Beaudine writes, “There is a reason you and I have been given the friends we have, and it’s this strategic group of friends that is the first part of (the) equation.” We don’t realize that our closest friends are the best resources we have! Instead, we think a stranger is going to be our biggest help in achieving our goal.
This makes perfect sense. For example, when my clients are networking, they often don’t talk to the people who are best suited to help them succeed. I had a client who worked in the transportation industry and was laid off. After weeks of telling him to make sure that he was talking to his network about his career goal and asking for specific help, he was getting stuck. So I reached out to mynetwork. Within a day, I had an opening at a local company for him to follow up on. When I gave him the information, he said, “Oh. A guy I used to work with works there now.” Well then, dude, why didn’t you already know about this opening? Because he wasn’t using his “100.”
The most important lesson:
Take care of the people on your “100 list” and they will take care of you.