Today's Reach Personal Branding Series Interview call was with Tony Beshara. I now regret mentioning his free teleseminar, "The Changing World of Resumes" on the BeAResumeWriter.com event listing, or further promoting it on my Resume Writers' Digest Facebook page and Twitter feed.

First off, I guess I don't understand why William Arruda would select Tony as a guest for the interview series. Resume writers -- and career coaches -- have been some of the most loyal proponents and brand ambassadors of the Reach Personal Branding system. Yet in Beshara's book, "Unbeatable Resumes," he specifically denigrates the work of resume writers: 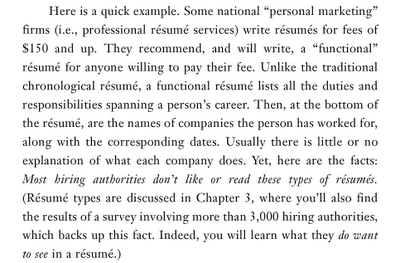 I personally don't know a lot of resume writers who would choose a functional format for their clients. Occasionally, yes. Chrono-functional formats can be useful. As resume writers, we understand the #1 principle that Beshara communicated on the call: The purpose of the resume is to get the interview. We write resumes that will accomplish that purpose. That's our only objective. If our clients don't get interviews with the resumes we wrote, we're not going to get many more clients, are we?

We know that. We design resumes that get past the 16-year-old temp named "Jennifer" who is the resume "screener." But we ALSO write resumes (and cover letters, dammit!) that get READ by hiring managers. Beshara said that the average American company has just 16 employees. In those companies, the hiring manager is often the business owner...or one step removed.

Resumes are like car ads in magazines. They're designed to capture your attention and deliver the 'benefits' of experiencing the car (or candidate) in person. The point of the magazine ad is to get you in the door for a test drive; the purpose of the resume is to trigger an interview.

Would THIS "Unbeatable Resume" get your client an interview? 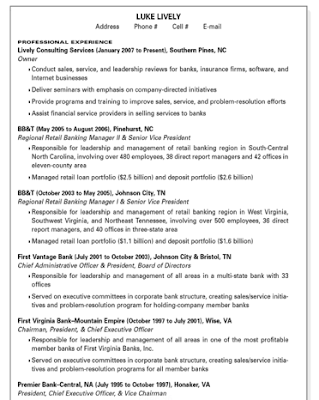 I mean, I get it. Recruiters have different needs for a resume from hiring managers. Beshara even admitted as much on the call. But he's doing a disservice to job seekers with his "Unbeatable Resumes" platform -- because the reality is: You can tell job seekers all you want that they need to quantify their accomplishments on the resume (On the call, he put this as, "Stories sell, but numbers tell.") -- but most of our clients are really good at their jobs, but not so great at writing about it. That's a fact.

That's like giving me a book on "Refund-Winning Tax Returns" and expecting me to do my own taxes. Just because I have the knowledge of how to do it doesn't mean I can do it effectively ... or want to (or that it's a good use of my time!).

Some recruiters have a chip on their shoulder about career coaches and resume writers. They say, "We only get paid when we place the candidate." Beshara thinks resume writers should be compensated the same way:

But the reality is, recruiters screen out dozens -- sometimes even hundreds of candidates -- who they won't work with, because they don't fit the mold (or, as Beshara put it in the call, they are a "risk").  Resume writers and career coaches take the time to work with these folks and help them position their skills, experience, and accomplishments more effectively. Yes, we get paid to do that. We are performing a service for them. (Bashara isn't a pro-bono recruiter, is he? He gets paid for what he does too, because it provides a benefit for his client, the employer.)

I guess most of us are a bargain, then, if we're helping our clients get an interview -- much less a job -- for "double the asking price" (of the resume) or, in other words $1,000. How about resume writers who get their clients interviews but only charge $150, or $200? That, in a word, is "unbeatable." (It's also not a strategy for making six figures a year, but I digress.)

To be fair, Beshara did have some good "resume 101" basics that he shared on the call:


Good advice. A lot of it is the same advice we give our clients. The difference is, we help them figure out how that translates into an interview-winning resume. From what I've heard of Mr. Beshara, and read in his book, his resumes are designed to make his job as a recruiter easier... not necessarily help the "average" job seeker develop a document that will secure the interview.

Is this the type of document that will capture attention in a stack of resumes? 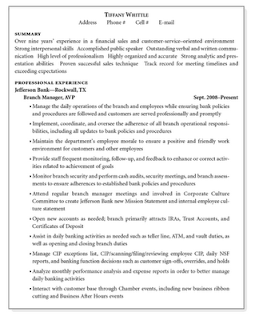 Not in my opinion.

Ultimately, I can't recommend "Unbeatable Resumes" because it's not a great book.
And because it has a foreword by Dr. Phil. (That should have tipped me off right away.)


But mostly because it doesn't value the work that a professional resume writer can add for job seekers -- and I don't recommend books that denigrate our profession.