I have just updated the "Making Money as a Resume Subcontractor" Special Report with the results of the more recent 2009 Resume Writers' Digest Subcontractor Survey. (I will be conducting the 2010/2011 survey in the next few weeks.)

Because the information was replaced in the report, I've decided to "archive" the 2008 results writeup in this blog post. 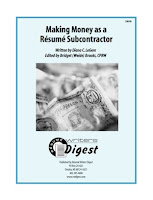 As you might expect, for many resume writers, subcontracting is a way to smooth out the peaks and valleys of self-employment, at least according to the responses in the Resume Writers’ Digest 2008 Subcontracting Survey.

Sixty-six resume writers completed the survey. Of those, 56 percent are currently subcontract writers, either for an individual or a firm. The rest used to write resumes as a contractor, but are not currently doing so.

Compensation
The opportunity to earn extra income is often the driving force behind the decision to subcontract. Interestingly, the average pay for nearly half of all writers was between $51-$150 per project. Nearly three- quarters of writers are paid a flat fee for each project they accept, receiving 21-35% of the client’s charge, in most cases.

Typical projects include a resume and cover letter together (55 percent), followed by a resume only (18 percent). Other services include bios, thank you/follow-up notes, interview preparation training, KSAs, and ASCII text conversions.

Project Management
Most subcontracting projects are assigned via e-mail (61 percent), although a substantial number are also assigned over the phone (17 percent) or through a web portal (12 percent).

Because standardization is one key to working with a large volume of clients, it’s not surprising that 35 percent of resume writers work with clients via e-mail contact only, transforming old résumés and client worksheets into new documents.

What the writer produces is also fairly uniform — 56 percent of writers work with the client from the draft production through project finalization, working directly with the client to make changes. Seventeen percent produce a draft version only, and 20 percent create the draft but then work with the contracting individual or firm to finalize the project.

Some contracting firms supply templates (24 percent), while most prefer the writer produce the document entirely from scratch (46 percent).

Most subcontract writers are generalists; however, for those that specialize, they most often identify themselves as experts in writing executive resumes.