I was inspired to write this post by an "introduce yourself" thread on the National Resume Writer's Association (NRWA) LinkedIn group. What I wrote ended up being too long for that forum, so I've printed it here. 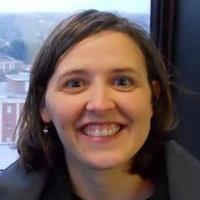 My name is Bridget (Weide) Brooks. (The "Weide" part is my maiden name ... pronounced "Why-Dee.") I live in Omaha, Nebraska with my husband and business partner, Jon.

I've been writing resumes since the age of 12, when I wrote one for my dad, who was unemployed at the time. He got a job with the federal government, and I had found my new career! (Well, not really. Yet. And actually, I refer out clients wanting federal resumes nowadays. Hmm. Hadn't thought of that connection before.) Anyway, I revived my interest in resumes when competing at Nebraska's State Leadership Conference for the Future Business Leaders of America. In the "Job Interview" competition, high school seniors would prepare a resume and cover letter for a fictional company ("Merit") and then participate in mock interviews with real business leaders from the Omaha area. I was a pioneer in the tactic of actually targeting my resume and cover letter to Merit's needs. (Most people just wrote generic resumes and cover letters, because they didn't know what Merit did. I gave Merit an industry, market niche, and backstory and made that clear in the cover letter, so the interviewer could "play along" -- making my interview much more effective than my peers.) I ended up being "Runner-up Ms. Future Business Leader of Nebraska" that year (1991).

More important, I came back to my high school for the next seven years and taught resume writing and job interviewing to each successive year's class of seniors competing at the State Leadership Conference. One highlight was when my younger sister won "Ms. Future Business Leader of Nebraska" and placed fourth in the national "Ms. Future Business Leader" event. (I also helped prepare approximately 120 graduating seniors for their future job searches!)

I began dating my now-husband, Jon, when we were seniors in high school. We dated all throughout college, and when it came time to graduate (both of us received a bachelor's degree in journalism with an emphasis in public relations from the University of Nebraska at Omaha in 1996), we decided to start our own business. We decided to focus on the emerging "SOHO" (Small Office, Home Office) market, helping other self-employed folks with their marketing and promotion. I also wrote resumes (a natural tie-in to the business, since it was helping individuals "market and promote" themselves). While we eventually changed the focus of the business from SOHO professionals to somewhat "larger" small businesses, I have continued to write resumes throughout all 16 years of our business. During that time, I also subcontracted as a resume writer for another resume writer and also for CareerPerfect (a national contracting firm).

In 1999, I started a trade newsletter (in print format) for resume writers -- Resume Writers' Digest -- because I had questions about the industry that I wanted answered, but the information I wanted wasn't available from the professional associations serving the market. I wanted concrete data about pricing, revenues, busy times of the year, services being provided, etc. -- so I initiated the Resume Writers' Digest Annual Industry Survey. I interviewed resume writers on topics as varied as operating a resume service from home (at a time when most resume writers -- including me -- had business offices), working as a subcontractor, and numerous marketing and promotion topics. One of our most popular features of the print edition was "conference coverage" -- working with a team of freelance writers, we'd give you a sense of the key takeaways in brief write-ups of the major sessions from professional association conferences.

Although we had several hundred subscribers, I discontinued the print publication in the Spring of 2005. I brought it back as an online-only newsletter in the Fall of 2007, publishing 2-4 issues annually. I've been blogging about topics of interest to resume writers since June 2007 (wow--coming up on five years now!). And, in September 2011, I launched a membership site for resume writers -- BeAResumeWriter.com -- offering access to all the back issues of Resume Writers' Digest, monthly teleseminars, and forms and templates for resume writers to use in their business. Plus, each month subscribers get a Special Report (like "Write Great Resumes Faster" and "Website Traffic Secrets for Resume Writers") and Pass-Along Materials, which is content you can put your name on and 'pass along' to your own resume clients and prospects. (These have been very popular -- previous topics have included Jobseeker's Guide to Salary Negotiation, Getting Started With LinkedIn In Your Job Search, and Jobseeker's Guide to Online Reputation Management). There is also a "Free" level option -- you get access to streaming audio recordings of previous teleseminars, special reports, and the current issue of Resume Writers' Digest.

I'm still writing interview-winning resumes -- although mostly for past clients these days. I'm also going to be speaking at the National Resume Writer's Association conference in Charleston in September on the topic of "How to Create Passive Income and Recurring Revenue for Your Career Services Business."