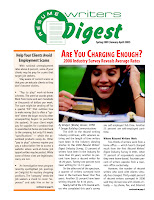 On the other end of the spectrum, a quarter of writers surveyed have been in the business fewer than five years. Another 25 percent have been writing resumes for 6-10 years.

Most resume sales -- nearly 70 percent -- include not just the resume but also a cover letter. References and other supporting documents are often part of the sale (12 percent).

Show Me the Money!
For those that reported an hourly rate, charges range from $10 to $400/hour. The most frequently reported hourly rate was $50; the average rate was $93.42.

The average resume sale is $300, but the most frequently reported responses ranged from $125 to $600.

The average hourly rate in the 2007 survey was nearly identical ($94/hour); however, the average resume sale in 2007 was reported to be $629. The difference may be attributed to economic factors or possibly the absence of some higher-charging resume writers from this year's survey.

January continues to be the busiest month of the year (26%), with September (18%) a close second.

For the complete survey results write-up, purchase the back issue of the Spring 2009 issue for $3.