Is Your Client an Idiot?

Are your clients idiots? Do you charge more than $500 for a resume? If your answer is yes, then the VirtualJobCoach thinks they're idiots for paying that much.


The sad thing is that the VirtualJobCoach blog (note: edited to remove link to site, since I don't think I should be rewarding them with traffic for their bad behavior) has some pretty good articles on it (Simon and Barry seem to be nice guys), and the product they offer for career coaches looks interesting (kind of like JibberJobber). But I don't understand why they need to cut other people down in order to promote themselves.


Here's a screen shot of the post (and again, I'm not giving the link to the actual site because I don't think they deserve the traffic, and it will only encourage them to do this more). 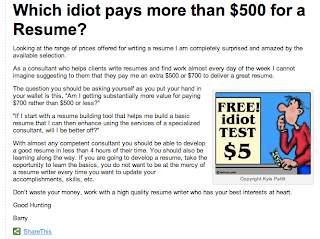 This is the comment I posted on their blog (as of this moment, still awaiting "moderation" before it will become a public comment):

Saw this come across Twitter today (although it appears to be a post from last year). I’m very disappointed in this post.
Why do you feel the need to disparage your resume writing colleagues who charge more than you do? Most of the resume writing profession is collegial … different writers have different specialties, and many resume writers I know provide value well in excess of the $500+ they charge. (Note that I personally don’t charge that much for a resume, but I don’t disparage those who do! I’ve seen their work, and it’s fabulous.)
To use your logic, why would anyone buy a $30,000 car, when they could buy one for $13,000? Both of them are going to get you where you’re going. But … aha!! The ride is going to be different.
That’s the case with working with career professionals. The end result is the same — to help the job seeker get a job. But our clients aren’t IDIOTS for paying someone $500 or $700 to write their resume. Just as someone isn’t an IDIOT for driving a BMW instead of a KIA.
As the editor of a trade newsletter for professional resume writers, it saddens me that some in the profession feel a need to put down their colleagues (and, consequently, their colleagues’ CLIENTS), by calling them an IDIOT for investing in their career.
For a team that is selling a product targeted to coaches (CoachesAid) — which many resume writers are also career coaches — I find it interesting that you would insult your potential customers in this way. I look forward to your response.
Bridget (Weide) Brooks, CPRW
Editor, Resume Writers’ Digest
------------------------------------------------------------------
I also learned that Dawn Bugni had addressed this same crew in her "One Bad Apple" post. Apparently, they liked the negative attention (and traffic) that they got from recycling another one of their resume writer-bashing posts (one from April 2009) and decided to do it again.
Interestingly enough, the headline of the Spring 2009 issue of Resume Writers' Digest is "Are You Charging Enough: 2008 Industry Survey Reveals Average Rates." The 2008 Resume Writers' Digest Industry Survey results revealed that the average resume sale is $300, but the most frequently reported responses ranged from $125 to $600. So while most resume writers don't charge $500, there are a lot that do ... and are all of their clients idiots? I don't think so.
In fact, Wendy Enelow wrote an article for the Summer 2009 issue of Resume Writers' Digest that, in part, addressed the "what do you charge?" issue. She wrote:
"I was stunned by the resume pricing numbers that Bridget shared from the survey ... absolutely stunned!!" She believes the prices are much too low.  She went on to write, "In my opinion, resume pricing should never be a fixed fee, but rather a range. For example, to say that all mid-professional resumes cost $400 is ridiculous. One client may have had two sales jobs and your writing job is quick and easy. The next mid-professional client has had six jobs (four of which he was fired from and worked for less than one year) and lots of other "issues." That writing job will take you twice as long to write, if not longer."
Your thoughts?